Sandwich was a key access point to Canada for freedom seekers who traveled the Underground Railroad through Michigan to the bustling city of Detroit. By the early 1850s, abolitionist Henry Bibb was reporting that Underground Railroad travellers were crossing into Sandwich at an astonishing rate, ranging from about fifteen per week to sixty five in one day. They made their way to Sandwich from nearly every state where slavery was legal: Kentucky, Tennessee, Missouri, Delaware, Maryland, Virginia, the Carolinas, Georgia, and states even farther south. While some freedom seekers settled in Sandwich, many others only stayed there briefly before moving on to cities, towns, and settlements farther away from the border, whether in pursuit of fresh opportunities or out of a desire to be safer from slave catchers.

As early as 1807 when Peter and Hanna Denison arrived with their children, all formerly enslaved in Macomb County, Michigan, Sandwich proved to be an appealing destination for refugees from American slavery. While slavecatchers sometimes made incursions into Sandwich in pursuit of their human “property” with varying degrees of success, the colonial government of Upper Canada generally upheld the promise of granting legal freedom. This policy became more widely understood  after the Blackburn case of 1833. 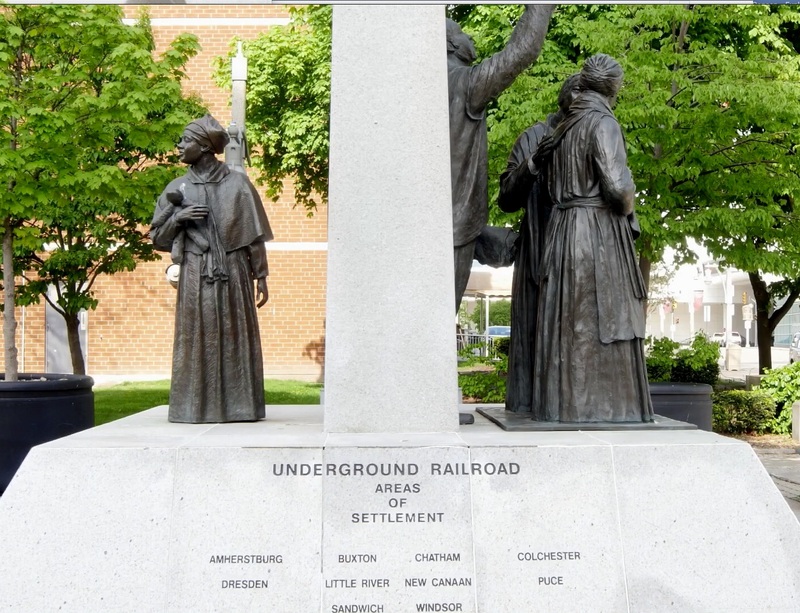 In 1833, Thornton and Lucie Blackburn, a formerly enslaved couple from Kentucky, were found by slavecatchers in Detroit and jailed with the expectation that they would be returned to slavery. However anti-slavery activists and supporters rallied around the jail, leading to the so-called Blackburn Riots of 1833. The Blackburns, separately, were freed by supporters and spirited across the river to safety, but because a law enforcement official had been badly injured in the uprising, the Americans sought to have the Blackburns returned to the United States to stand trial, claiming that the Blackburns had incited the riot. While the extradition requests were being evaluated, the Blackburns were arrested and held in the Western District jail in Sandwich. John Colborne, the Lieutenant Governor of Upper Canada at the time, and Attorney General Robert Simpson Jameson determined that it was illegal to return the Blackburns to the United States where their punishment (re-enslavement) would be greater than any penalty they could face for an equivalent crime in Upper Canada. In so doing, they established a precedent that would protect future freedom seekers legally from extradition requests of that kind. Indeed, some legal scholars have argued that this marked the genesis of Canada’s refugee policy. The Blackburns, once freed, settled briefly in Amherstburg before relocating permanently to Toronto.

One freedom seeker who arrived in Sandwich with a spectacular story to tell was Caroline Quarlls. In 1826, she was born in St. Louis to an enslaved Black woman named Maria; her biological father was a white slave owner from a prominent family. By virtue of her mother’s status, Caroline, at birth, automatically became the property of her father’s family. Growing up enslaved, Caroline dreamed of achieving freedom. Eventually, on July 4th, 1843, she made the courageous decision to set off for Canada on her own—a daunting proposition for a sixteen year old girl travelling unaccompanied. Her journey took her from Missouri to Illinois to Wisconsin, then on to Indiana and Michigan and ultimately to Sandwich, Upper Canada… chased nearly the entire way by men intent on recapturing her, including a steamship captain who had unwittingly sold her a ticket and who was now liable for her “market value” of $800. Along her journey, Caroline was helped by Underground Railroad operatives, most notably Lyman Goodnow, a Milwaukee abolitionist who accompanied her by wagon from Wisconsin to Michigan. She crossed the Detroit River to freedom, still pursued by slave catchers, and landed at Sandwich in 1843.

In Sandwich, Caroline Quarlls met another formerly enslaved person, Allen Watkins. He had been enslaved in Virginia and Kentucky. When his wife had been sold away from him and their children, the grief had driven her to commit suicide. Allen Watkins and his small children made their way to Canada from Kentucky in 1838. Allen found work in Sandwich as a cook at the home of Colonel John Prince. Allen and Caroline were married in 1844 and were instrumental in the building of the Sandwich First Baptist Church. Many of their descendants remain in Sandwich, Windsor, Detroit, and nearby communities… including those who continue to live on the original homestead on what is now Watkins Street.

It is fortunate that upon arriving in Sandwich, Caroline was determined to learn to read and write. She used these skills to correspond with Lyman Goodnow many years after her journey to freedom, unwittingly ensuring through those letters that the stories of both her Underground Railroad journey and Allen’s were safeguarded for all time.

While Caroline and Allen spent the rest of their lives peacefully in Sandwich, a young man named Andrew had a far different experience. In a memoir written later in the nineteenth century, William Lewis Baby, ironically a descendant of the formerly slave-owning Baby family, told the story of Andrew who had been hired in 1830 as a paid servant in the family home. The home, built in 1798 and owned first by the slave-owning Duff family before it was sold to the Babys, still stands at corner of Russell and Mill Streets in Sandwich… the Duff-Baby Mansion, Windsor’s oldest building. After escaping from slavery in Kentucky, Andrew had crossed the Detroit River to freedom. He had worked for the Baby family in Sandwich for six months when suddenly, the slave-owner appeared in Sandwich to demand his return. The Babys assured Andrew that he would not be returned and that the law of Upper Canada would protect him, and they took measures to keep Andrew physically safe. Unfortunately, the flaw in the family’s plans became evident one Sunday when Andrew’s former master and five men he had hired in Detroit attempted to kidnap Andrew while the Babys were all at church. Andrew did his best to fend off the attack. Arriving back at home to find Andrew tied up, bloodied, and on the verge of being carried away, the Babys fought off the abductors with the help of other locals. The Babys then sent Andrew to Toronto with money and letters of recommendation in the hope that he would be safer there. The fate of Andrew thereafter is unknown.