Black Lives in Sandwich: An Overview

For over two hundred years, people of African heritage have been part of the Sandwich community. The first African-descended residents of Sandwich were people held in slavery by wealthy landowners in the late eighteenth century. Families long considered the “founders” of Sandwich, such as the Askins, Babys, and Duffs, made use of both Black and Indigenous slave labour in their homes, on their land, and in their businesses, including the fur trade. When Lieutenant Governor Sir John Graves Simcoe and allies sought to limit slavery in Upper Canada in the early 1790s, families such as the Babys were vocal opponents against abolition. In Sandwich today, buildings, landmarks, and streets such as Askin, Baby, Peter, and Russell continue to bear the names of slave owners… including Peter Russell, not a Sandwich resident but a wealthy Toronto slave owner and President of the Executive Council of Upper Canada who was instrumental in purchasing the lands that made the Town of Sandwich available to United Empire Loyalists. Nearly lost to history are the enslaved people who did much of the work, adding to their owners’ wealth and benefiting the community without reaping any benefits themselves: enslaved Africans such as Jupiter, Pompey, Sam, Joseph, Suzanne, Job, Jacques-Caton, Jacques, Geneviève, Thérèse, Rose Lontin, Léon, a woman known only as a “Cursed negroe wench”… and Joseph Cutten or Josiah Cutan, who was tried in Sandwich in 1792 for stealing rum and furs from a wealthy merchant, possibly becoming the first person executed by hanging anywhere in Upper Canada. 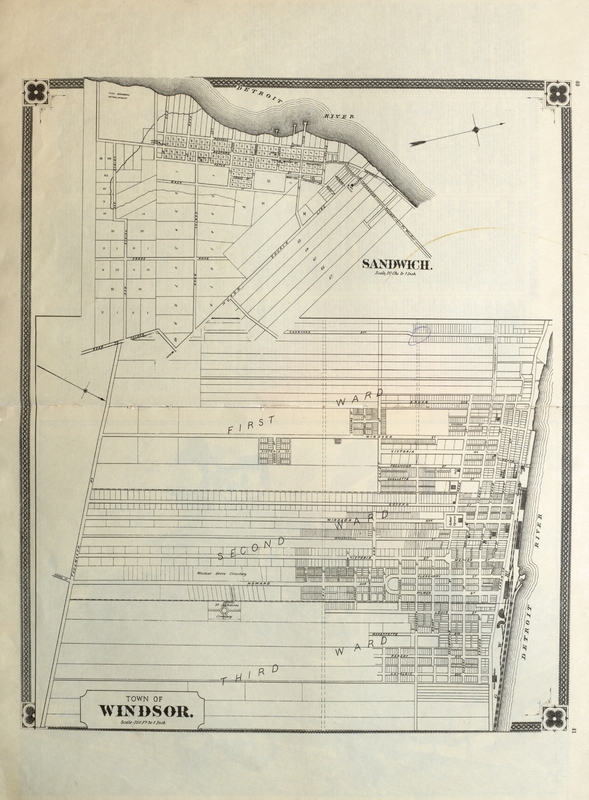 However, as early as 1789, Black United Empire Loyalists began to receive land grants in and around Sandwich, and by 1794, free African Americans such as the Prince, Robertson, and Fry families had settled in a town where the other people of African descent were all enslaved. Soon, freedom seekers also made their way to Sandwich, including Peter and Hannah Denison and their children who arrived in Sandwich in 1807, having been formerly enslaved in Macomb County, Michigan. Their story was by no means typical: after being granted their freedom but required to leave their children in bondage, Peter and Hannah had sued the slave-owner unsuccessfully. Only after the courts failed them did the Denisons seize their children and flee across the Detroit River. They found paid work in wealthy Sandwich residents’ homes and attended St. John’s Anglican Church. The irony was that Blacks newly arriving in the area after the passage of the 1793 Act to Limit Slavery could not be enslaved, yet that same legislation meant that many of those previously enslaved in Upper Canada remained in slavery. Slavery in Upper Canada, including Sandwich, was still legal until the Slavery Abolition Act took effect on August 1st, 1834.

By the early 1830s, Sandwich had gained a reputation as an ideal destination for individuals escaping from slavery in the United States. Especially after the colonial authorities refused to extradite Thornton and Lucie Blackburn to the United States to be re-enslaved in 1833, freedom seekers felt more secure in their legal freedom on the Canadian side of the Detroit River. (Of course, the porous border meant that slavecatchers still could and did cross into Sandwich to attempt kidnappings of formerly enslaved people, but with few exceptions, the government of Upper Canada did not participate in handing over freedom seekers.) While no Underground Railroad journey could ever be described as easy, the Detroit River, merely a mile wide, was one of the most advantageous points at which to cross to freedom in Canada. Sandwich, which was the capital of the Western District of Upper Canada, was growing; goods from [what is now] Southwestern Ontario found many willing buyers in the markets of Detroit and other Great Lakes ports; work in and around Sandwich was plentiful. Sandwich’s proximity to the river and to communities in Michigan meant that cross-border networks of likeminded individuals could be maintained with relative ease. This made it possible for Underground Railroad operatives on both sides of the border to work together, for transnational organizations to focus on the settlement of refugees on Canadian soil, and for abolitionists on either side of the river to communicate and collaborate. As Black settlers established deeper roots in Sandwich, some men of the Black community formed a company of volunteers to defend Sandwich during the 1837-1838 Upper Canada Rebellions, while others joined a volunteer militia of African Canadians from Essex and Kent Counties to fend off rebel attacks, participating in the capture of the Schooner Ann on the Detroit River.

However, despite the legal freedom extended to new arrivals of African descent, race relations were not entirely rosy. While African Canadians lived side by side with white neighbours in Sandwich rather than in a segregated neighbourhood, they were barred from attending the common schools, and racist attitudes were prevalent. In 1857, a Sandwich newspaper, the Maple Leaf, reported a speech by Colonel John Prince in which he expressed stereotypical views about African Canadians being ungrateful and predisposed to commit crimes such as theft. He recommended that the Crown send all Blacks to the Manatoulan (sic) Islands where they could no longer bother white residents. And in I861 a writer in the same newspaper lamented that too many Black settlers were arriving: “We wish that slave owners whose slaves made the free states would leave them in peace because we do not want them!”

Nevertheless, Black residents of Sandwich persevered, forging a community, establishing churches and schools, and celebrating their freedom. Emancipation celebrations became common, often being held at Park Farm (the estate of Colonel John Prince, now known as Mic Mac Park on Prince Road) between 1838 and 1856. Black Sandwich residents were also recorded as celebrating Emancipation Day at LeDuc’s Tavern in 1843. At the Stone Barracks, now the site of General Brock School, a grand Emancipation Day celebration was held in 1851. Organized primarily by Henry and Mary Bibb, that celebration featured speeches, music, entertainment, and food, including a dinner which raised funds to erect Sandwich First Baptist Church.

By the Census of 1851, there were 407 Blacks reported among Sandwich’s population. Many of their descendants remain in the district to this day.