The University of Windsor sits on the traditional territory of the Three Fires Confederacy of First Nations, which includes the Ojibwa, the Odawa, and the Potawatomie. We respect the longstanding relationships with First Nations people in this place in the 100-mile Windsor-Essex peninsula and the straits – les détroits – of Detroit [1].

In 1728, Father Armand de la Richardie founded a Jesuit mission on the Pointe de Montreal, the site of a bend in the river where the town of Sandwich would later grow from, ushering in the beginning of “l”Assomption du Detroit” [2].  In 1767, this Jesuit mission, aimed to serve the needs of local French settlers and Indigenous peoples, was granted a new status, with its Assumption Parish becoming the first parish in Canada west of Montreal [3]. By 1784, the Jesuits had expanded the parameters of their mission at Detroit, incorporating land, located near the present-day Ambassador Bridge, given by the Huron in appreciation for Richardie and his successor Father Potier’s services [4].  This land would later become the site of Assumption College.

After Potier’s death in 1781, he was succeeded by Father Jean Francois Hubert, who oversaw the construction of a new log church, which has unfortunately disappeared over the centuries [5].  Hubert, who was later made Bishop of the Diocese of Quebec, was later succeeded by Father Francois Xavier Dufaux in 1787 [6].  Dufaux, whose tenure saw the completion of this now-lost church in 1788, struggled with community poverty that prevented Sandwich residents from properly supporting the school [7].  Father Jean Baptiste Marchand, a Sulpician who had previously been Superior of the College of Montreal, took over after Dufaux’s death in September 1796, and was the first to establish missions further into Canada, constructing St. Peter’s on the River Thames (today Prairie Siding) and St. John the Baptist at Amherstburg [8].  Father Crevier, who succeeded Marchand in 1816, saw the community’s need for proper education, thus creating a new school, led by the Grey Nuns, and starting what he hoped would become a proper college, with students enrolled in Latin and Mathematics [9].  Bishop MacDonnell from Kingston came to Sandwich in 1827 to plan for a new church and school, including a convent and boy’s school, but despite plans for the school being handled by Crevier and Francois Baby, nothing came of it, and the Grey Nuns left the parish shortly afterward [10]. Crevier was succeeded by Father Angus MacDonell in 1831, who began the construction of a new brick parish to replace the old, dilapidated one, nearly finishing the project by his departure in 1843 [11]. With the Diocese of Kingston’s division in 1841, the newly-elected Bishop of the western portion, Father Michael Power, restored the Assumption parish to the Jesuits, who had originally founded the site [12].

Father Pierre Point, who succeeded MacDonell in 1843, brought seven assistants with him to help complete the new church, which was achieved in 1846 [13].  Point and his other Jesuit Fathers devoted themselves to expanding Sandwich’s educational community, opening elementary schools in the area and creating plans for a new college, the foundations for Assumption College [14]. 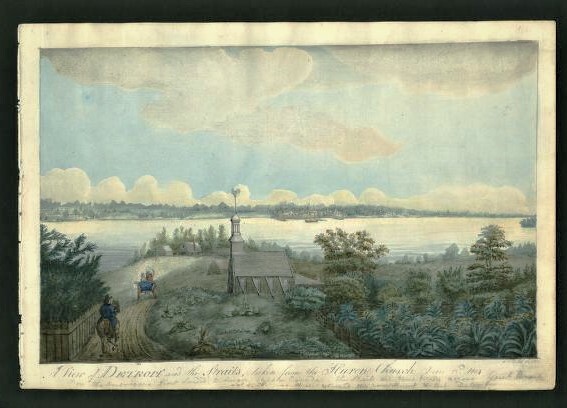 A View of Detroit and the Straits, Taken from the Huron Church