The start of the decade saw immediate changes to Assumption’s campus, ones that would challenge its existing ways. In 1950, St. Mary’s Academy moved its Holy Names College to Assumption’s campus, thereby making Assumption co-educational [1]. The first phase of the female residence was completed in 1959, with its second phase completed in 1963, and it was named Electa Hall after the first dean of Holy Names College and a long-time teacher at St. Mary’s [2]. 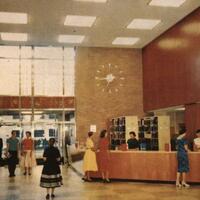 Continuing with Assumption’s modernization, in 1956 a building fund campaign was organized to raise funds for a heating plant, library, and student centre, with the bulk of the fund being supported by the local business community, such as Ford Canada, Hiram Walker, and Heinz Canada, along with assistance from Essex College’s provincial funding [3]. Assumption’s new state-of-the-art library was completed in 1958 [4]. This section is today the West Building of the library, with an extension, now called the Main Building, built in 1972 [5]. That same year, plans began on a new engineering building to house science and engineering facilities, at the enormous cost of 5 million dollars, which, with assistance from local fundraising and provincial funding, would be completed by fall 1962 [6].

On July 1, 1953, Assumption ended its affiliation with University of Western Ontario, one that had begun in 1919 [7]. With the end of this affiliation, Assumption was granted its own charter as a university, which forced LeBel to reorganize Assumption’s academic structure and consider how to fund its expensive science, engineering, business, and nursing programs without Western’s support [8]. Frank DeMarco, who had been part of Assumption’s efforts to modernize their science program and to build Memorial Hall, gave a controversial suggestion to establish an independent public college [9]. This proposal, which would allow Assumption to take advantage of provincial grants, was met with some backlash from the Basilians, but after LeBel’s failure to secure other avenues for funding, DeMarco’s plan was accepted in 1954 [10]. In July 1954, Essex College was established by charter, with the Ontario government setting aside funds on the condition that Assumption and Essex would affiliate [11]. Without full consensus on the subject, the affiliation was not secured until a few years later [12].

Assumption of the Future 1957

By 1954, Assumption College was inducted as a member of the National Conference of Canadian Universities and Colleges, the University Matriculation Board of Ontario, and the Association of Universities of the British Commonwealth, highlighting its important work as a post-secondary school [13]. In 1956, via an Act of the Ontario Legislature, Assumption College changed its name to Assumption University [14]. That same year, the newly-named Assumption University secured its affiliation with the non-denominational Essex College, which would be responsible for the departments of science, business, nursing, and math [15]. As well, Assumption affiliated with the Holy Redeemer College, which was the national seminary of the Redemptorist Fathers, thus continuing Assumption’s original goal of preparing students for religious missionary life [16]. To add to Assumption’s international recognition, in 1957, Assumption became affiliated with the Anglican Canterbury College, allowing for the creation of programs in philosophy, religious knowledge, and medieval history, but most importantly becoming the world’s first affiliation between Anglican and Roman Catholic post-secondary schools [17]. On December 16, 1957, Assumption celebrated its centennial with a thanksgiving mass attended by the Archbishop of Detroit, Edward Cardinal Mooney, and the Apostolic Delegate to Canada, Giovanni Panico, showcasing Assumption’s far-reaching reputation [18].

By the end of the decade, Assumption University had seen a large increase in its annual enrollment, jumping from 600 students in 1956 to 1000 in 1959 [19]. Due to the city of Windsor’s economic and demographic growth, in part from the St. Lawrence Seaway system that opened in 1959 that made the Detroit River a major port, Assumption would be forced to make even larger changes than had already occurred in the 1950s, paving the way for the creation of the University of Windsor [20].