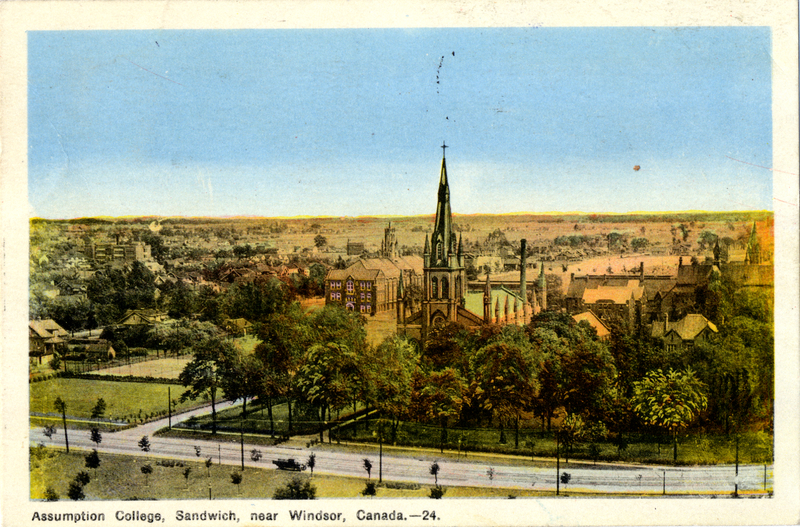 In 1940, Father Vincent Guinan was appointed as Assumption’s next president, despite his protests, much like Dillon, that he was not suited for the position [1]. His main concern was that he could not replace MacDonald, who had made Guinan his right-hand man through all of Assumption’s difficulties with Western and St. Mary’s, but Guinan was able to persevere through those challenges [2]. However, Guinan’s presidency spanned the start and end of WW2, presenting even more difficulties than those that MacDonald had faced [3]. The National Selective Service, established in 1942 to “regulate the recruitment of civilians” to ensure that Canada retained a large enough labour force for the continuation of major industries, significantly selected both male and female civilians (even married women and those with children) but greatly impacted post-secondary schools like Assumption [4]. Throughout the war, Assumption faced problems in maintaining adequate numbers of staff and students due to the NSS, as Guinan had to hire any employee through the government’s selective service board, making it more difficult to gain new staff members [5]. The higher-paying jobs available in Windsor factories exacerbated Guinan’s labour shortage [6]. To ensure that Assumption had enough staff members to continue operating, Guinan appealed to the Grey Nuns of the Immaculate Conception, who had been working at Assumption’s chapel and infirmary for decades, to take care of basic maintenance and janitorial work [7]. The Wartime Prices and Trade Board, established in September 1939, was given responsibility for wage and price controls by 1941 to prevent extreme price increases and war profiteering, but also established rationing for goods like steel, gas, oil, butter, and meat [8]. 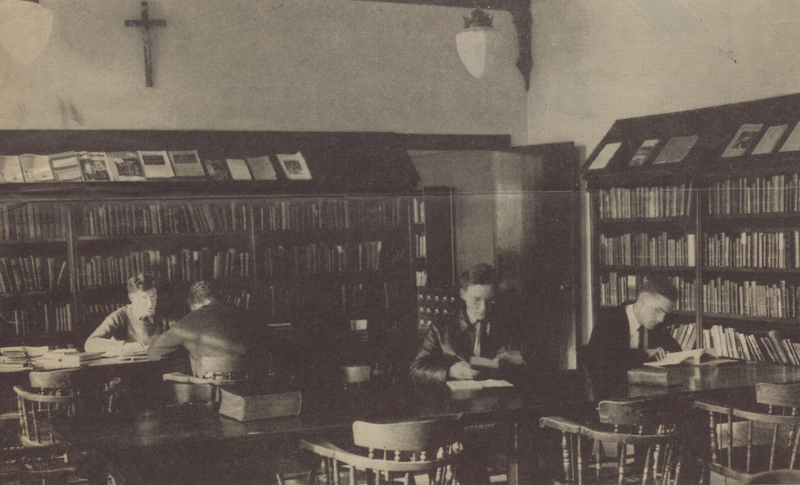 These regulations obviously impacted the daily running of Assumption, with regular rationing making things even more difficult for Guinan. However, Guinan’s main concern during the war years was always the status of Assumption’s students. By mid-1940, the Conference of Canadian Universities made an agreement with the Department of National Defense to give students special status [9]. This allowed “full time college and university students…to take their military training at their own institutions" [10]. Their training, amounting to 110 hours per year supplemented by a two-week summer training camp, would allow students to complete their studies [11].  With the entry of the United States into the war in December 1941, Assumption’s American students were originally allowed to enlist in the US Naval Reserve to complete their studies [12]. However, in October 1942, orders from Washington instructed Detroit’s Office of Naval Procurement that “no student in a Canadian college could be placed on the naval reserve list" [13]. This new command would affect Assumption’s number of American students that they relied on for a significant portion of their profits [14]. However, Guinan was able to secure the support of many prominent American officials like Frank Murphy, the former governor of Michigan and US Supreme Court Justice [15]. As such, Guinan was able to negotiate that US citizens studying at Assumption would be exempt from the draft via the V7 Plan of the US Naval Reserve, allowing them to complete their studies [16]. By 1942, Guinan had created air raid evacuation plans, enrolled staff in firefighting courses, established the Registrar’s office as an emergency headquarters for the Windsor Civilian Defence Committee, set up first aid stations throughout Assumption, and had the school participate in regular blackouts and air raid drills, showcasing Assumption as a school fully prepared for war [17].

In between dealing with the financial and demographic effects of the war, Guinan and his staff continued to emphasize Assumption’s status as an international institution. During Guinan’s tenure, he developed Kennedy’s failed plan for a pre-medicine course into the St. Luke’s Medical Society, which still continues with the University of Windsor’s pre-medical program [18]. As well, Guinan created a highly-regarded pre-engineering program and the Pius XI Labour School that brought political and management representatives that would serve as ardent supporters of the school [19]. Along with these important academic achievements, Assumption continued to enhance its reputation even further afield than the US. George McMahon argues that “[i]f MacDonald saved Assumption from total financial disaster, [then] Murphy gave Assumption an international reputation for excellence" [20]. Continuing from the massive success of his Christian Culture Series, Murphy established the Christian Culture Award in 1940 to mark Assumption’s 70th anniversary [21]. This award is presented to a “distinguished lay person who has contributed greatly to the furtherance of Christian ideas in art, literature, philosophy or science" [22]. The first recipient of the award was a woman, Sigrid Undset, a Norwegian novelist famous for her historical works and outspoken anti-Nazi views [23]. Like his Christian Culture Series, this award has persisted to the present day, helping to highlight influential individuals and continuing to increase Assumption’s reputation around the world.

In March 1945, Assumption College began a Victory Fund Campaign, organized by Assumption’s Alumni Association, to raise funds for its expansion, the first time it had asked for local residents to donate to assist the process [24]. By the end of the campaign in mid-April, Assumption had raised over $300,000 to expand the College’s facilities, including the construction of new auditorium and science buildings [25]. Despite this increase in funds, Assumption’s Victory Fund Campaign put forward an application to the city for a municipal grant of $50,000 in order to expand the college’s accommodations, which were only designed for 200 day and night students [26]. At this time, the college had 350 students enrolled, in part due to local population increases, business expansion, and returning servicemen seeking education [27]. 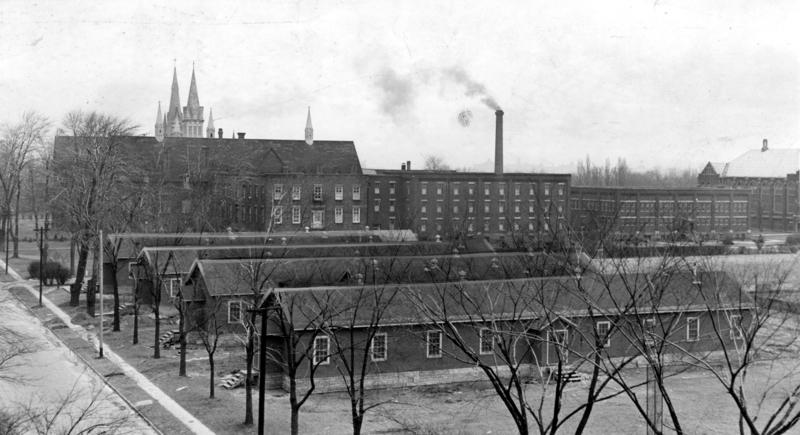 By December 1945, six army barracks were constructed on Assumption’s campus to accommodate mass numbers of demobilized veterans from both the US and Canada, many of whom had been students at Assumption before they enlisted or were drafted [28]. A Detroit Free Press article discussing the number of veterans returning to Assumption stated that the Canadian government loaned the barracks to Assumption, which could hold 400 students per day, while Assumption spent $15,000 to move the barracks from an airfield and to turn them into classrooms [29]. This article also stated that the Canadian government offered American veterans $750 per year while they finished their studies and Assumption arranged their room and board for only $400 per year, with allowances for married veterans or those with families, making it feasible for demobilized veterans to start or finish their post-secondary education [30]. At the same time, plans were being made for a winter fundraising campaign to raise $750,000 to erect new permanent buildings in the spring of 1946 [31].

In November 1946, the news of Assumption’s land grant for expansion resulted in some local dissent, including an opinion piece in The Windsor Daily Star by a Mr. Redeker [32]. An alumnus, Ian B. Donnadadch, responded to Redeker in a very lengthy piece that outlines Assumption’s operations and reputation at the time, including the debated expansion to create new facilities [33]. Assumption’s affiliation with the University of Western Ontario, he argued would make it “one of the best liberal and general arts degrees in Canada” because of its dedication to “teaching all men with no distinction being made for color or creed” that Donnadadch argued many secular universities could not state, its large amount of Canadian and American military veterans as students, and Assumption’s efforts to bring (religious) cultural awareness of Windsor through its Christian Culture Series and college organizations [34]. Donnadadch’s response highlights Assumption’s strong alumni network, local community support, and its influence in the Windsor area and beyond. 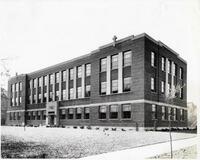 Assumption’s Memorial Science Building, dedicated to the 121 Assumption College alumni who died during World War II, was completed in fall 1948, offering “the most modern features of construction,” including “a glass type of blackboard” with lighting to reduce glare, laboratories with movable worktables, and an emphasis on “brick, steel, and cement” in its construction [35]. With this $460,000 new building, Assumption continued its expansion program with plans for expanding the gymnasium, an administration building on London Street (now University Avenue), a library, a social sciences building, and a 1,500-capacity theatre auditorium on the intersection of Patricia Avenue and London Street [36]. Despite these large expenditures, Guinan was able to pay off most of Assumption’s debt and make necessary repairs via fundraising efforts by alumni associations and other Assumption groups like the Dad’s and Mother’s Clubs, donations from community members (both Basilian and secular), high enrollment numbers, and stipends paid by parents for Assumption priests to say Mass for their children’s safe return during the war [37].

By the end of the decade, Assumption had successfully persevered through the war and had even grown, with Assumption’s 1949 convocation that saw its then-largest ever class of 170 graduates [38]. At the same ceremony, the first women received an Assumption Alumni award, Sister Mary Electa, for her services to develop Holy Names College and her work as a teacher at St. Mary’s Academy [39]. Sister Electa was later honoured with the building of Assumption’s female residences, which was fully completed by 1963, and was named Electa Hall after her [40].

This award, established in 1944 to recognize the efforts of individuals who helped to shape Assumption, still continues today as the University of Windsor’s annual Alumni Awards [41]. This award, much like Murphy’s Christian Culture Series, helped to increase Assumption’s reputation as an internationally-renowned school in all aspects. With the monumental celebration of Assumption’s 75th anniversary in August 1945, the school seemed willing and able to face any challenge possible, with a great financial position, excellent relationships with Western and the new Bishop of London, John Kidd, and a cross-border reputation as a modern educational system [42].

With the end of Guinan’s term as President in 1946, the advocate for a modern Assumption had left, but his impact would be seen throughout the next decade [43]. Guinan’s final act shifted Assumption-Western relations for the future, as he persuaded Assumption to adopt a single position in charge of “supervision and care of the students in the college” rather than continuing the more cumbersome system of juggling the perspectives of various Assumption officials in their dealings with Western [44]. As such, Assumption’s first Dean, E.C. LeBel, was appointed in 1946, who was fully responsible for Assumption’s operation and relations with Western, but would also see Assumption through its biggest changes in the 1950s [45].