With the entrance of Canada into World War One in 1914, Bishop Fallon’s attention was turned to recruiting Catholic chaplains for the front lines, while Forster was concerned with internal issues at Assumption through most of the decade [1]. In 1915, St. Michael’s Hall was constructed for additional accommodations and study rooms for students [2]. Forster continued his expansions with Assumption’s first gymnasium in 1915, the St. Denis Hall, which was named in honour of Denis O’Connor, who had died in 1911 [3]. The original St. Denis Hall cost approximately $17,000 to build, with a running track, swimming pool, and other facilities for athletics [4]. When the University of Windsor built a new sports complex in 1981 to replace the old facility, to the cost of 5 million dollars, it was again named after O’Connor, despite debate over its religious-tinged name [5]. As well, Forster made improvements on older buildings, from roofing and repainting to the installation of electricity [6]. Finally, Forster “solidified Assumption’s reputation as a school worthy of the name ‘college’” with the addition of a fourth year to the high school course, thereby meeting Ontario provincial standards to allow for the completion of a high school diploma [7]. Despite these efforts to modernize and ensure that Assumption could be affiliated with Western, the war was still able to affect the College, with conscription and the 1918 influenza pandemic drastically affecting both students and staff, making it nearly impossible to realistically continue negotiations with Western [8].

In 1919, Assumption College became affiliated with the University of Western Ontario, now Western University [9]. This affiliation brought a broader curriculum to Assumption, including both general and honours programs for Bachelor of Arts degrees, graduate courses in Philosophy to obtain a master’s in Arts, and pre-professional programs such as engineering, medicine, and law [10]. An October 6, 1919 article in the Detroit Free Press outlines rumors of Assumption’s affiliation with Western University and (unfounded) fears that “one of the most important Roman Catholic theological institutions in Canada” would be relocated to London, Ontario [11]. 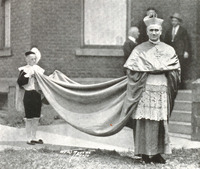 However, these fears regarding affiliation resulted in tensions between Forster and Bishop Fallon, the bishop of the Diocese of London [12]. With this affiliation, the Basilians were pressured to relocate to Western’s campus in London to complement the Ursuline-run Catholic women’s college, who had also recently affiliated with Western, but the Basilians were reluctant to leave the area and campus that they had spent decades developing [13]. 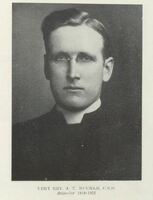 One of the last acts Forster performed as president of the College was to begin negotiations with Fallon and Western University, leaving his successor, Father Joseph T. Muckle, to finalize the affiliation on 8 October 1919 [14]. But even with a new president of the College, Fallon continued to pressure Assumption to move to Western’s campus with increasing aggressiveness, even mentioning his plans for Assumption’s move in Assumption College’s 1920 Jubilee Yearbook [15].

Despite the monumental success of the 1910s, with two new halls constructed and a historical affiliation with Western University, the aggressive nature of Bishop Fallon would continue to pressure Assumption to give up its 50-year tenure in Sandwich, forecasting additional tensions into the 1920s.