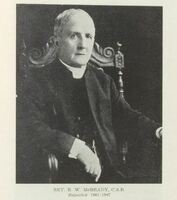 In 1901, Father Robert McBrady took over from Cushing as Assumption’s third president. Much like Cushing, who was his contemporary at St. Michael’s, McBrady was a staff member under O’Connor from 1870 and maintained a close relationship with O’Connor [1]. Unlike Cushing, McBrady was willing to modify the status quo if he believed it would benefit Assumption [2]. This radical and modern spirit resulted in McBrady creating a new teaching system that departed from the past system of having one teacher instructing the same class in every subject except for catechism, but now each professor would only teach the subject they were best qualified for and would teach the subject to different classes [3]. McBrady continued with this revolutionary ethos throughout his career, with the publication of an annual Catalogue that outlined the school’s courses, rules, costs for boarding or day students, a cumulative list of graduates since 1870, and prize winners for the previous academic year [4]. This publication helped to advertise Assumption, helping to recruit more students from even further afield than Windsor and Detroit. The first statistics on the College’s student population were undertaken in 1901, showing a ratio of Americans to Canadians three to two [5]. Assumption’s reliance on American boarders, mainly from Michigan and Ohio but some from as far away as Florida and California, was due to a lack of local support, as Catholics from Windsor and Sandwich were ambivalent about the College, while French families in the area preferred to send their sons to Quebec for school [6]. McBrady’s Catalogue and efforts to modernize the school helped to advertise and attract students, whose tuition fees were still essential to Assumption’s longevity. In 1903, McBrady established the first Assumption College Alumni Association to formalize and organize alumni meetings of the “Old Boys,” as well as to get alumni financial support for the school [7]. With this alumni support and Cushing’s diligence in paying off Assumption’s debt, McBrady began to make improvements to the College, such as water heaters, gas lamps, and indoor plumbing, but also began construction on Assumption’s new chapel, which would be completed during the tenure of his successor, Forster [8].

Father Francis Forster succeeded McBrady in 1907 as Assumption’s fourth president, and his tenure saw the development of a college curriculum to adequately prepare students for professional life, shifting Assumption to become a modern 20th-century school [9]. His efforts to make Assumption into a proper liberal arts college resulted in the separation of the high school and college departments and efforts to bring both departments to the Department of Education’s standards, including adding a fourth year to the high school program [10]. Forster continued with McBrady’s ambitious building project, reported in the Detroit Free Press in November 1907, to construct new chapels at both the college and church, both funded in large part by the alumni association McBrady founded [11]. In addition to these efforts, Forster made the earliest attempt to establish Assumption as a degree-granting liberal arts school through affiliation with the University of Western Ontario (now Western University), beginning serious negotiations with Western’s chairman, R.M. Meredith, with approval from his Basilian superiors as early as 1908 [12]. However, Forster’s efforts were put on hold since the London Diocese lacked a Bishop, as Bishop McEvoy was appointed to Toronto in April 1908 and his successor, Bishop Michael Francis Fallon, was not appointed until December 1909 [13]. Forster’s battles with Fallon over control of Assumption College, its potential affiliation, and resulting ability to grant degrees, extended well into the 1920s, affecting the future of Assumption College and therefore the future University of Windsor.