By 1890, Assumption’s enrollment reached 200 students from the US, Canada, and even Mexico, incorporating a new arts program that was modelled on other universities’ philosophy departments, increasing the College’s reputation and O’Connor’s legacy [1]. An August 1890 article in The Globe stated that during O’Connor’s tenure at Assumption, he transformed it from “some deserted army barracks” to a respected and prosperous educational institution [2]. However, despite claims that “[t]he days of uncertainty, indecision, [and] embarrassment…were over,” the end of O’Connor’s tenure saw the continuation of Assumption’s chronic poverty and small enrollment numbers, with the College unable to meet the magic number of 300 students to adequately provide for itself [3]. By the start of the new decade, the Assumption that O’Connor molded was quickly becoming too narrow in its scope and future potential, forcing its new leaders to modernize or face ruin [4]. 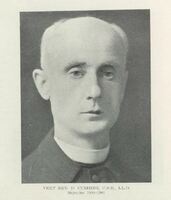 Father Daniel Cushing took over from O’Connor as president of Assumption in 1890 [5]. His close relationship with O’Connor, as a theology student of his and serving on his staff, made him an obvious successor for control of Assumption [6]. Cushing’s tenure at Assumption emphasized “preserving the status quo,” continuing in O’Connor’s mold to maintain Assumption as a collège classique and as a junior seminary, preparing students for priesthood or religious service [7]. Cushing, similarly working by the mold of O’Connor’s tenure, showed great prudence by quickly paying off the debt from the 1883 construction and ensuring no further debts [8].

In 1893, Assumption College received a $5,000 donation from their first major benefactor, Father Marseilles, a local parish priest from River Canard, which today would be the equivalent of $145,000 US dollars, provided Assumption with significant funds to abate its almost constant poverty [9]. Despite this precedent of maintaining the somewhat limited vision of the College as merely to supply the Basilians with future priests, Cushing’s tenure at Assumption saw the College become publicly legitimate, with graduates from Assumption’s classical course now eligible to apply to medical school in Michigan, showcasing Assumption as not just a school for future priests but as a form of practical education for the real world [10].

Cushing’s 11-year tenure and his emphasis on maintaining O’Connor’s model of Assumption saw the College stay virtually unchanged, both in its construction and vision, but with the appointment of Cushing’s successor in 1901, Assumption would see efforts to modernize and become a modern school.