The 1880s saw the continuation of O’Connor’s plans to revitalize Assumption College, with a continuation of an impressive building plan to accommodate its increased enrollment. The second phase of O’Connor’s building plan was completed in 1884, resulting in a north-south addition along Huron Church Road that was three stories tall for classrooms, teachers’ residences, and student dormitories [1]. This wing, now the main administration building for Assumption University, cost $35,000 at the time, which today would total over $930,000 in US dollars [2]. With this large addition, Assumption’s students and staff, “for the first time in the history of the College,” had adequate accommodations to market itself as a proper educational institution, unlike its previous decades of impoverishment [3]. 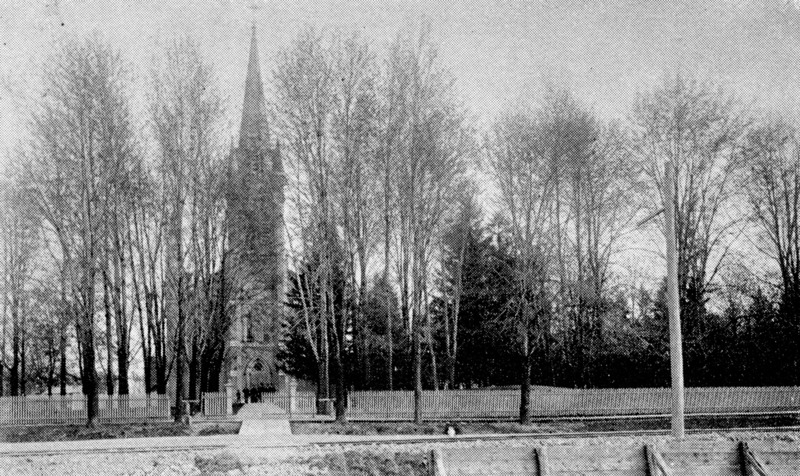 Cathedral (R.C.) Church of the Assumption

By 1883, Assumption was stated as having 114 boarding students, mainly from Michigan, Ohio, and Indiana, a stark contrast to its previous numbers, and 14 Basilian teachers for “ecclesiastic, scientific, and literary” courses of study, including a future Superior of the College, Father Robert McBrady [4].  McBrady, who had left Assumption for St. Michael’s College in 1879, returned to his alma mater in 1882, serving his college as “a remarkable teacher, thoroughly trained in the classics, yet able to handle any subject except music" [5]. As well, Father Daniel Cushing, another future Superior of the College, returned to Assumption during this period to teach mathematics, eventually transferring to St. Michael’s College in 1886 [6]. To add to these honours, a June 1886 Detroit Free Press article highlighted the new St. Anne’s Church, on the corner of Nineteenth and Howard, that would be placed in the care of Assumption College and its Basilian Fathers, further adding to Assumption’s responsibilities but also its prowess in administration [7].

In recognition of his efforts to revitalize Assumption College, O’Connor was presented with an honourary Doctor of Divinity in September 1888 from Pope Leo XIII [8]. Similarly, with Bishop Walsh’s elevation to Archbishop of Toronto in July 1889, O’Connor was rumored to replace him [9]. This suspicion would come true, with O’Connor taking over Walsh’s position as Bishop of London on October 18, 1890, and was later appointed as the Archbishop of Toronto in May 1899, signalling the end of an era at Assumption and a large vacancy to fill for the next superior of the College [10].