By the spring of 1855, the Jesuits had amassed enough funds to begin construction on a new college in the area [15].  The foundation stone of the college was laid on June 17, 1855, and its roof completed on December 2, 1856, with the building 90 by 50 feet, three stories high, and with two wings on each side [1]. On February 10, 1857, Assumption College was open, with 20 boarder students living in residence and 60 day students, with its program based on the traditional Quebec-style college [2]. Assumption College, along with housing and teaching its own students, housed students from Sandwich’s Common or Grammar Schools [3].  For the first few months of the College’s operation, it was under the supervision of a parish lay committee that not only was responsible for its administration, but also for paying off its $16,000 debt from construction [4].

By March 1857, Assumption College was not only operational but stirring local tensions, as shown by a query by Reverend Edward Dewar, Rector of Sandwich’s Anglican Church, to the Minister of Education that highlighted that “[t]he Roman Catholics have lately erected and opened a College…under the direction of the priests” [5]. However, Dewar’s concern around Assumption’s decision to “[make] the Common School the Preparatory Department of the College” showcases religious tensions within the community that would continue to haunt Assumption long after its inception [6]. The Jesuits relinquished control of the College after seven months due to educational commitments elsewhere and jurisdictional problems with the newly appointed Bishop of London, the Rt. Rev. Pierre Adolphe Pinsonnault [7].  As a result, the Basilian Fathers were invited by Bishop Pinsonnault to assume responsibility for the College [8]. Father Joseph Malbos, appointed by Pinsonnault as the first Basilian president of the College in fall 1857, had Assumption College incorporated as an educational institution by an Act of Parliament of Upper Canada [9]. This bill, first introduced on June 14, 1858 by Mr. R. Scott and Mr. Arehambeault, with the goal to incorporate “the College of L’Assumption” resulted in a Royal Assent on August 16, 1858 that made Assumption College an accredited institution for higher learning [10]. 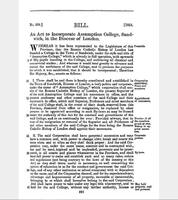 With this accreditation, Assumption College sought to expand its number of students as a method to both showcase its credentials and to increase its funds. Assumption College was frequently advertised in the Detroit Free Press as a method to entice American students to Sandwich, with special emphasis on the accolades of the staff, such as an English teacher who had taught in England for over a decade, its “complete progressive course of studies” including geography, history, science, and literature, and preparation of students for law, medical, and engineering occupations [11]. As such, a boat service was set up to ferry American students between Detroit and Sandwich to further encourage Detroit residents to enroll at the College, who would make up a significant portion of their annual enrollment throughout the decades [12]. By 1859, Assumption College had achieved enough success and acclaim that it was included in the annual issue of The Canadian Almanac and Repository of Useful Knowledge [13]. With Malbos’ efforts to increase its reach, locally, nationally, and just across the border, Assumption College began to thrive as a successful institute for higher learning. Despite Malbos’ short tenure as president, as he left the College in September 1857 for France, his efforts created a stable foundation for the College as successive Benedictines, Jesuits, and diocesan clergy assumed control of the College over the next two decades [14].